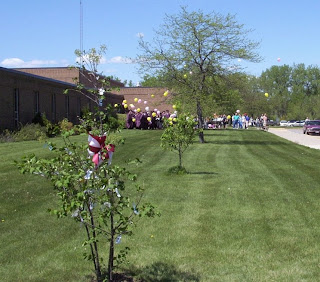 I thought I would share a couple of my favorite photos and the stories behind them. Actually it's the same story just continued from one to the other. Some of you may know the background but for the others I'll tell the story. I started working at school in July of 2004. One of the first people I became familiar with was the secretary. She had a daughter that was a senior that year. A few days before Christmas the daughter was killed in a car accident. To honor her memory, the FCCLA (that's use to be called the Future Homemakers of America for us old timers) which she was a member of, dedicated and decorated a tree and the staff had a ceremony and planted it the Friday before graduation. I was on duty the day of graduation and decided to take my camera along to take a few pictures. As the ceremony was nearing the end, they announced that the seniors and the girl's family were going outside to release balloons in remembrance of her. As they said that, two words popped into my head "THE TREE". So I went racing down the hall like a mad man, pulling the camera out of my carrying case as I am running. I get out the door, take a couple of breathes to steady myself and line up the shot. 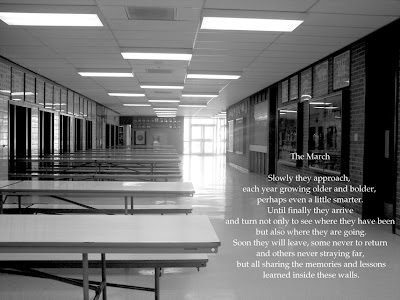 This photo is one of the special cards I have done. I made it up for and gave it to the Class of 2006. The next fall the girl's bother started Junior High. The one thing I always noticed was that the junior high kids sat by the doors and that there was a progression of the classes with the seniors sitting closest to the kitchen. That fall as I was walking through the commons in the morning, the brother was one of the first kids there, just like his sister. As I looked at him I could imagine his sister looking up from the other end and thinking a big sisterly thought like "Don't worry little brother, you'll get here someday". I took the picture from where she always sat and the story served as the inspiration for the verse except that I decided to do it from the viewpoint of some timeless being that has been observing us for years. That was when I came up with the idea for S.U.E (Some Unknown Entity). I try to use this perspective when taking pictures and writing to get me out what I know and see and to think about things differently.

Mike McPeek
Clark, South Dakota, United States
I currently work as a custodian in the Clark High School but have also ran a farm as well as worked at a potato chip factory. I am married to Deb and we have three kids, Eric, Ryan and Emily. I also have a love of computers going back 40 years. I am also an amateur taker of photos (don't feel quite comfortable calling myself a photographer yet). I am the host of the Bard on the Plains Podcast and Holding Out For a Hero Podcast. I also was co-host of SciFi Tech Talk and Geekiest Show Ever.