It Takes a Village (and not the way Hillary meant) 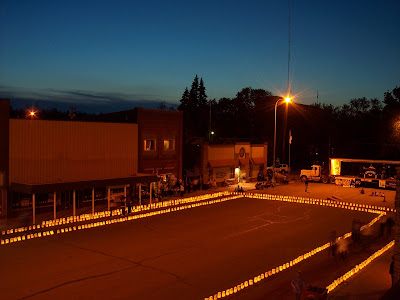 Recently on the NosillaCast Mac Podcast Host Allison Sheridan was talking about whether the internet is causing us to lose empathy with people because we do not meet them in real life to be able to judge their reactions to what is being said. Allison said her interactions were expanded because she had met people she wouldn't have met before. I would agree with Allison that the internet has broaden the experiences of a Midwest plowboy more than I would have ever imagined but I do wonder what it has done to our sense of community. Way back in the Stone Ages (60's and 70's) when I was growing up on the Plains of South Dakota there wasn't a lot to do. There were about 3 TV Channels (4 if the wind was in the right direction), AM Radio, and the collection of odd and assorted book that graced the back stairs. We didn't run to town all the time for activities very often. Most of the time when we got together with people it was at a function at our local church or sometimes you just went over and visited your neighbor. Basically it was you and the people around you. So everyone learned to set aside their differences and work for the common good. This lesson was driven home to me this winter when my Mom passed away and we were at the funeral home talking about her life for her obituary. Her and my Dad were involved in a number of  activities. National Farmers Organization, American Cancer Society, state and local Weed boards and other groups. It kind of struck me then that  even though people still belong to groups their attentions are more widely dispersed. More things to do, places to go and things to see, on and offline. I think we lose touch of what is going on with the people around us. It's not until something happens (sometimes tragic) that causes us to stop and realize that we don't live isolated lives but are part of a web of inter-connected souls molding and shaping the world around us.
Posted by Mike McPeek at 4:53 PM

I think maybe if we pay attention we can have both. I'm reconnecting lately with friends locally, dropping by their houses on my bike just to say hi. And yet knowing that when my mom is sick (as she is right now) people in England, Ireland, New Zealand, Australia, a cruise ship in the South Pacific and even South Dakota of all places are thinking about her and praying for her rapid recovery. Maybe we CAN have our cake and eat it too?

Mike McPeek
Clark, South Dakota, United States
I currently work as a custodian in the Clark High School but have also ran a farm as well as worked at a potato chip factory. I am married to Deb and we have three kids, Eric, Ryan and Emily. I also have a love of computers going back 40 years. I am also an amateur taker of photos (don't feel quite comfortable calling myself a photographer yet). I am the host of the Bard on the Plains Podcast and Holding Out For a Hero Podcast. I also was co-host of SciFi Tech Talk and Geekiest Show Ever.